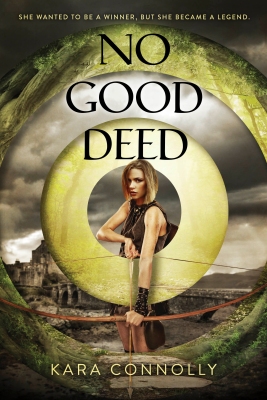 Fans of Dorothy Must Die will love this reimagining of the legend of Robin Hood. Girl power rules supreme when a modern girl finds herself in the middle of a medieval mess with only her smart mouth and her Olympic-archer aim to get her home.

Ellie Hudson is the front-runner on the road to gold for the U.S. Olympic archery team. All she has to do is qualify at the trials in jolly old England. When Ellie makes some kind of crazy wrong turn in the caverns under Nottingham Castle—yes, that Nottingham—she ends up in medieval England.

Ellie doesn’t care how she got to the Middle Ages; she just wants to go home before she gets the plague. But people are suffering in Nottingham, and Ellie has the skills to make it better. What’s an ace archer to do while she’s stuck in Sherwood Forest but make like Robin Hood?

Pulled into a past life as an outlaw, Ellie feels her present fading away next to daring do-gooding and a devilishly handsome knight. Only, Ellie is on the brink of rewriting history, and when she picks up her bow and arrow, her next shot could save her past—or doom civilization’s future.

There was an error retrieving images from Instagram. An attempt will be remade in a few minutes.